Amazon Lightsail 1GB is no match for $10 VPS from Linode, DO, Vultr...

TLDR: Amazon Lightsail 1GB will melt down with less than 15% sustained cpu usage

Amazon Lightsail launched to much fanfare last week, threatening the business of competitors like DigitalOcean, Linode, OVH, Atlantic.net and many others who have long offered simple, cheap, all-included price VPS servers.

At VpsBenchmarks, we specialize in testing this type of VPS so we wasted no time firing up an instance of the 1GB 1 core $10 flavor of Lightsail. I setup our web app on this VPS, pointed traffic at it and also ran Sysbench tests.

It took only 2 hours after setup and an average 25% cpu usage for the cpu steal to start climbing, just a few percentage points at first, but more than 80% after one more hour. At this point the web server was unresponsive, requests that normally take 60ms were now taking several seconds. This was on happening on 12/4 01:00 UTC.

Okay then, experiment aborted. 25% sustained cpu usage is too much, all other VPS at the same price can handle that but maybe we're just over the limit, we moved traffic to another machine and let the Lightsail VM cool down for a few hours.

CPU steal back down to 0. I tarpitted a couple of braindead robots that were generating a few thousands requests per hour to make it easier for Lightsail and directed web traffic at it again. We're down to 10-12% sustained cpu usage and all went well for 8 hours. But that was still too much: same pattern, cpu steal started climbing slowly first and then fast before the web server became completely unresponsive at 14:00. The same cycle was repeated one more time on Monday morning at which point I gave up and stopped the trial.

Metrics as seen by VpsBenchmarks during the second meltdown (UTC time): 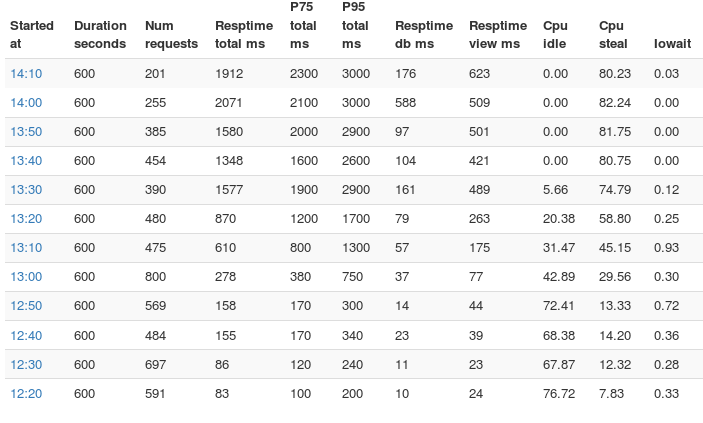 This is how it looks like in the Lightsail CPU metrics chart (PST time): 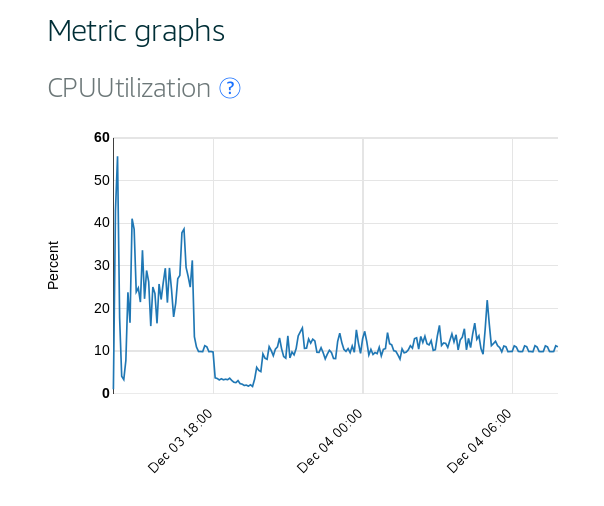 How does that happen?
I can only guess here but EC2 VMs in the t2 class are assigned a certain number of CPU credits. The VM earns credits below a set cpu usage and loses some above that same limit. When credits are exhausted the cpu gets throttled. Even though the cpu credit balance is not visible in Lightsail, the same system is most likely applied and I bet the limit is set at 10%. That makes Lightsail 1GB the equivalent of a t2.micro instance.

It should be noted that for $7, Vpsdime easily handles that traffic.
For less than $4, OVH "VPS SSD 1" can do the same.

What about Sysbench tests?
We ran sysbench tests on Lightsail 1Gb too. There's nothing to brag about there either. The CPU and memory numbers are decent but the disk metrics are disappointing.

We'll test the 2GB $20 version of Lightsail soon but judging by the results above, Lightsail is not a good deal compared to DO, Linode, Ramnode... well actually, all other providers that operate in the same price range.