Burstable CPUs VM instances appeared on Amazon EC2 for the first time in 2014. Since then, they have become ubiquitous at major providers in their entry level plans. The implementation varies between providers but the common denominator is that the user gets a fraction of one or more cpu cores to use as a baseline and is additionally allowed short bursts of CPU usage to 100%. The lower the average cpu usage is, the longer the CPU bursts can last.

The main advantage of those plans is that they more affordable than others. Compare the EC2 t3 medium (burstable, 2 cores, 4GB) at $0.0416 per hour to the closest fixed cpu allocation VM, the c5 large (2 burstable cores, 4GB): at $0.085 per hour, it will cost you double the price for comparable specs. See Amazon EC2 pricing page.

We have tested 10 of those plans at vpsbenchmarks.com from Amazon EC2, Lightsail, Google Compute Engine, Alibaba Cloud and Microsoft Azure. Here is the list of plans with their price and specifications:

We want to know which ones of those plans can do the most work over the long term relative to their prices. The most relevant test to judge of the long term performance of a burstable VM is the "Endurance Test". It consists of a sustained CPU usage script that runs for 24 hours, sorts and shuffles a dictionary in a loop and maintains a 50% cpu usage for the entire time. While the script runs, the number of iterations (sort+shuffle) is reported and recorded every 10 minutes.

Typically, this is what the number of iterations per hours looks like, hour after hour, over a day: 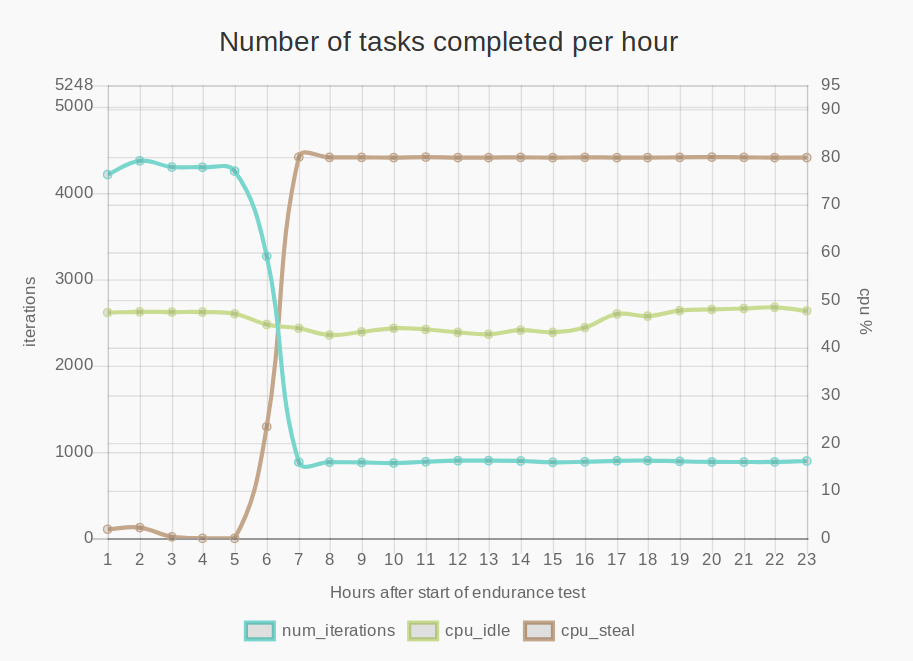 What you see is the VM going full speed for a few hours while cpu credits (or equivalent) are still available and then the throughput drops sharply at the same time as CPU steal goes up dramatically.

In the end, the number that matters and that we will use to compare the performance of those plans is the average number of iterations completed per hour over the 24 hours hours of the test. This number for all burstable plans is displayed on this endurance comparison page. 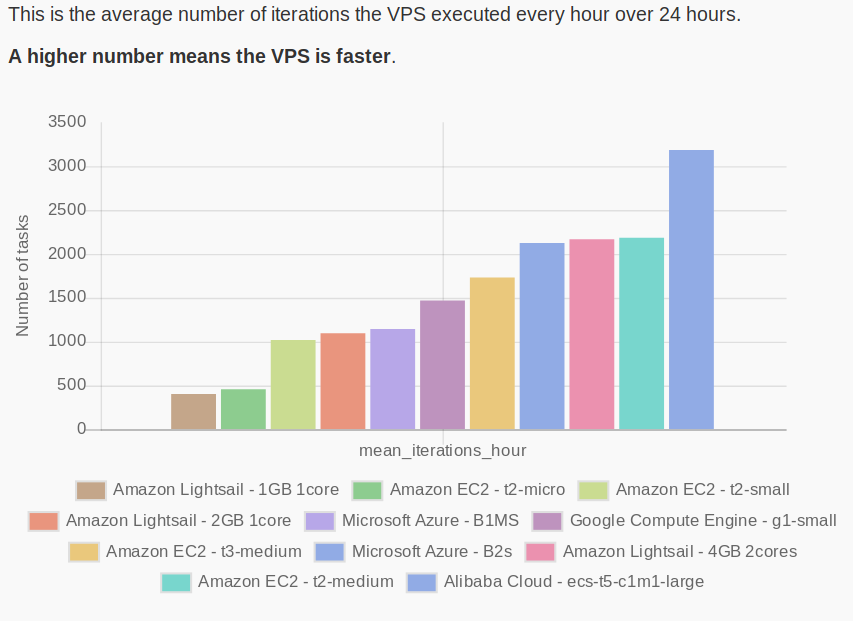 But that's not the whole story, price should also be a factor in choosing your cloud server. The following table shows the number of iterations per hour divided by the cost of the instance. In addition, the last column has the number of hours in the test before the instance gets throttled.

Once the price is factored in, Alibaba still leads, closely followed by Lightsail.

If you're trying to make up your mind between EC2 and Lightsail and performance/cost is your deciding factor, it's clear that you should go with the latter. The Lightsail 1GB plan, that seemed pretty plain when considering exclusively its performance, looks much better once the price is taken into account. That's especially true if you compare it to the EC2 t2 micro (likely the exact same type of instance), you get double the cpu power for every dollar you spend.

Workloads that are best suited for burstable VMs

Those plans are more affordable than others and they are a good deal for running light traffic web servers. If the system must run some background tasks occasionally, that might work too as long those tasks are not running all day long.

The most common mistake that is made when planning a computing deployment is to allocate resources for peak load 24/7. As a result the machines end up staying idle most of the time and you pay for a lot more than is really needed. With burstable VMs, your capacity grows at peak traffic but gets back to affordable levels outside of those peaks. Some would say this is the best of both worlds.

List of the best Virtual Private Servers, performance tested, that will cost you $10 or less per month.

Private Trials: VPSBenchmarks on your Servers

It is now possible to run the same benchmarks familiar to all visitors of vpsbenchmarks.com on your ...

Burstable CPUs VM instances appeared on Amazon EC2 for the first time in 2014. Since then, they have...

We are proud to provide objective and impartial benchmark data on this website. VPSBenchmarks receives support from some of the providers featured here but all tests are conducted the same way for all providers irrespective of our relationships with them.

If you find our benchmarks valuable, you can help by make your hosting purchases using the Provider Affiliate Buttons displayed throughout the site.